Sacred Heart and St William Church and Parish in Uppermill, Saddleworth was served from its inception in 1952 to 2012 by priests from the Society of the Missionaries of the Sacred Heart or MSC, which comes from the Latin Missionarii Sacratissimi Cordis.

Here are the names of the previous priests from the Missionaries of the Sacred Heart, along with the dates they have served in our Parish

James Michael Stubbs (always known as Jimmy) was born in Mallow, County Cork, Ireland in 1946 where he received both his primary and secondary education from the Patrician Brothers.

In 1965 he joined the Novitiate of the Missionaries of the Sacred Heart (MSC) and made his first profession in 1966. He was ordained to the priesthood on 18 December 1971 in Dublin and the following year he set off for South Africa where he worked as an MSC missionary priest for the next 37 years.

Fr Jimmy worked in several parishes, both rural and urban, beginning among the smallest of the tribes, the Venda people of the far north-east of the country. When the diocese of Tzaneen set up a pastoral centre for training lay people in 1987, Fr Jimmy became its first director, having spent a year on a pastoral studies course in Kenya in preparation for this new role. He served in the Centre until 1991, before moving south to the Archdiocese of Pretoria in what is today the Province of Gauteng, to take up the role of Director of the MSC theology house in Pretoria. In 1997 Fr Jimmy took up the role of parish priest in Midrand, situated midway between the cities of Johannesburg and Pretoria, where he ministered for the next eight years.

In 2006 Fr Jimmy was elected Regional Superior of the Southern African MSC Region and served a term of three years.

In July 2009, Fr Jimmy was appointed as Parish Priest of Sacred Heart and St William, Uppermill, bringing with him his years of pastoral experience. A talented musician, his guitar was used many times at Mass and to introduce new hymns to the parish.

Fr Jimmy was the last MSC priest to serve in Uppermill before the Parish was handed over to be run by the Diocese of Leeds in 2012.  Fr Jimmy moved on to St Alban and Stephen Catholic Church in St. Albans, Hertfordshire which is currently one of of six MSC parishes in England served by the MSC Irish Province.

Father Joe Falloon, MSC was born in Belfast and spent his childhood on the Falls Road. He was an altar boy in the Redemptorist Clonard Monastery there.

At the age of fifteen years he went to study in the Sacred Heart Apostolic School, Cork. Two years later he entered the Novitiate of the MSC in Glandore, West Cork. Then after taking temporary vows, he studied philosophy at Myross Wood, West Cork. Moving on to Moyne Park to study Theology, he was ordained into the Priesthood on 29th September 1953 at the Missionaries of the Sacred House of Studies in Moyne Park, Ballyglunin, County Galway.

Father Joe’s first appointment was to the Sacred Heart College as Dean of Discipline. By 1970 Father Joe had managed the offices of the Annals of Our Lady of the Sacred Heart before being appointed as curate to the Parish of St Joseph in Maidenhead.

Following a year in Basingstoke, Father Joe was transferred to the Parish of St Alban and Stephen, firstly to work as curate and later as Parish Priest.  In 1984 he moved to Liverpool, initially to the Parishes of St Mary the Mother of God and the Sacred Heart of Jesus, and later to become Parish Priest of St Albert’s, Cantril Farm.

1992 saw another move to Tamworth to be curate there and by September 1993 Father Joe was installed as Parish Priest of Sacred Heart and St William Uppermill, Saddleworth.

The parishioners of Sacred Heart and St William were delighted to celebrate the Golden Jubilee of his Ordination with Father Joe at a special Mass on 28th September 2003.

In April 2008 Fr Joe celebrated his 80th birthday at Sacred Heart, Uppermill where for his birthday the parishioners commissioned a stained glass window to complete the Tryptych at the back of the church.  The glass depicts Our Lady of Saddleworth and is dedicated to all the MSC priests who have served in the Sacred Heart parish in Uppermill.

Fr Joe "retired" to Dublin in 2009, where he has kept as busy as ever.  He has continued to visit Uppermill to serve the Parish during holiday times and in September 2013 a large group of parishioners travelled to Dublin to join in the celebrations with Fr Joe for the Diamond Jubilee of his ordination.

Fr Scriven was born in May 1911 at Liscarroll, County Cork, Ireland.  Educated at St Joseph’s School there, and at Sacred Heart College, Cork city from 1925 to 1930 when he joined the Order of the Missionaires of the Sacred Heart.  He studied in Belgium for three years and for four years in Holland where he was ordained in Stein on 10th August 1936.

Father Scriven celebrated his Golden Jubilee of his Ordination into the Priesthood whilst at Saddleworth.  Four years later at his Farewell Mass on Friday 14th September 1990, Saddleworth thanked him for his pastoral care and devotion, and prayed that God may give him many years of peace and happiness in his priestly life away from the hardship and worries of Parish work.

He returned to visit the parish whenever the opportunity occured.  As the Provincial of the MSC Society, he was instrumental in bringing the priests of the Society to the parish in answer to an invitation of the then Bishop Very Rev. John Carmel Heenan, later Cardinal Heenan.

He also had the distinction of being present for the first Mass celebrated in 1953 in the newly founded parish at Ladcastle Hall.

Fr Richard died peacefully on 1st Sept 2005 in St Joseph's Care Home, Cork, after a long period of illness. As he said "He was ready to go as soon as the Lord called him".

His Funeral took place at the Sacred Heart Church, Cork, attended by a large number of the Clergy, Members of the Society of the Missionaries of the Sacred Heart (of which he was a prominent member), relatives and friends.

Fr Jerome was born in Castlemagner, Co Cork on 2nd June 1922, the eldest of five children born to Daniel and Eileen O’Hanlon. He entered the MSC Novitiate in 1940 and was ordained a priest in 1947.

After a couple of administrative appointments, as comunity bursar in the formation community of Moyne Park, Co Galway, and then as manager of the Annals Office in Cork, Jerome moved to what would become his first love: parish ministry.

In 1973 Fr Jerome moved to become Parish Priest of St Albert’s in Liverpool, where he continued to minister until 1980 when he was appointed Superior and Parish Priest in Western Road, Cork.  After his six year term in Cork came to an end he became hospital chaplain to St Finbarr’s South infirmary for ten years until his retirement in 1997. Even in retirement, Fr Jerome continued to be active in ministry.

His funeral took place in Cork on Wednesday 1st July 2009.  May he rest in peace.

Fr John Wallace will be remembered for helping to acquire the stables at Ladcastle Hall in 1961 and converting the building into use as a church for the Catholic community in Saddleworth.

Missionaries of the Sacred Heart MSC

The Society of the Missionaries of the Sacred Heart was founded on 8 December 1854 by Father Jules Chevalier at Issoudun, France.  His ideal was to bring people to Christ through the preaching of devotion to the Sacred Heart of Jesus.

Father Jules Chevalier discovered in the Heart of Christ, the love and compassion of God for humankind.  Motivated by his experience of God and a world in need, Chevalier felt urged to make this LOVE known to all people.  He expressed this in the MSC motto:

May the Sacred Heart of Jesus be everywhere loved

Father Joe Falloon belongs to the last group of members who knew someone who knew the founder.

The MSC congregation numbers around 1800 Brothers and Priests working in over fifty countries on all continents.  Our Sacred Heart and St William Parish came under the Irish Province of the MSC Society whose members are involved in parishes, retreat work, chaplaincies, schools, universities and counselling.

The headquarters of the Anglo-Irish Province were formerly at Cork, but are now at Dublin. To find out more about their work please visit www.mscireland.com

To find out more about the other provinces and the work of the Missionaries of the Sacred Heart, please visit www.misacor.org 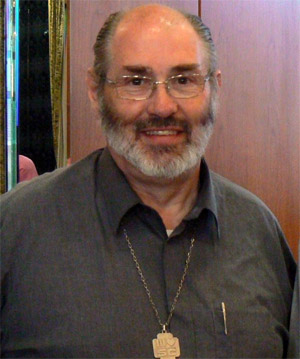 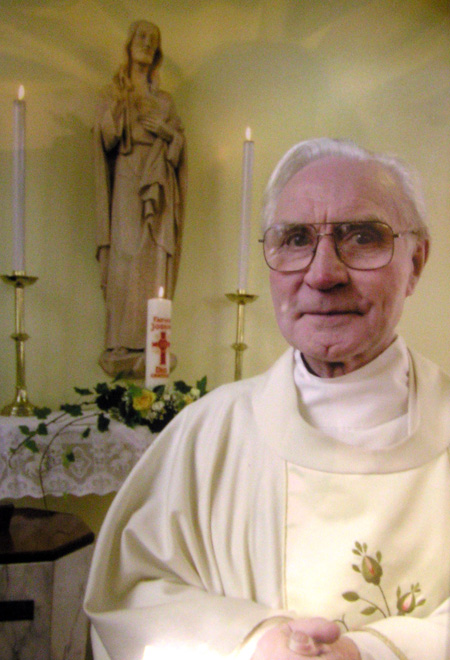 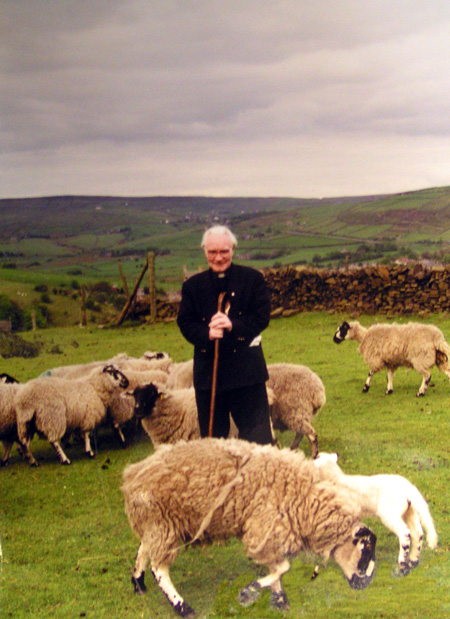 Fr Joe on the Saddleworth hills