Fr Bernard Bickers is the Parish Priest at The Sacred Heart and St William Catholic Church.

Fr Bernard Bickers was appointed to The Sacred Heart and St William by Bishop Roche in 2012.  He is the first Leeds diocesan priest to serve in the parish which had been founded in 1952 by the Missionaries of the Sacred Heart.  (See Parish History for more details)

He was born in Leeds in 1949.  He studied at Ushaw College Durham and was ordained in 1973.  After two years further study he was appointed to St Peter and Paul’s parish, Wakefield.  In 1977 he returned to Ushaw to teach Church History where he remained for 11 years.

In 1988 he went to Christ’s and Notre Dame College in Liverpool.  On returning to the diocese he has spent time at Myddelton Lodge, the diocesan retreat centre in Ilkley, St Winifred’s, Bradford, St Mary’s, Selby and currently here in Uppermill.  He has also served as Ecumenical Officer and Episcopal Vicar for the Clergy.

Fr Bernard is a trained spiritual director and has been, and continues to be, involved in both preached and individually guided retreats.

I am the Permanent Deacon here at Sacred Heart Church, and I am available to help and assist the people of the Parish and the Parish Priest in any way required and in accordance with directions given by the Bishop.

I was born in 1937 in Nairobi, Kenya where my father was in the colonial service. I was educated at Worth, at that time a Benedictine Priory. Mass then was celebrated in Latin, the priest who said the Mass spoke quietly with his back to the congregation. I wanted to be part of the action so I became an Altar Server. For me, the big advantage of the old rite for celebrating the Mass was that, wherever I was in the world (I was then serving in the Royal Navy), I knew exactly what the Priest was doing and saying!

In 1961 I married Stella and in 1976 we moved to Saddleworth and have lived here ever since. In 2004, Father Joe Falloon asked me if I had considered putting myself forward as a candidate for ordination as a Permanent Deacon. After some research, reflection and prayer, I did put myself forward and was ordained Permanent Deacon by Bishop Arthur Roche in St. Anne’s Cathedral, Leeds, on the 20th March 2010.

It is a great privilege to proclaim the Gospel at each and every Mass I attend as Deacon.  In the absence of the Parish Priest, I preside at Liturgies of the Word and Holy Communion.  I may also preach and do so when the occasion requires.  As a Deacon, I am an ordinary Minister of the Eucharist, helping with the distribution of Holy Communion.  As a Minister of the Altar, in addition to trying to ensure that the celebration of the Mass proceeds smoothly and well, I enjoy the privilege of being an ordinary Minister for the administration of the Sacraments of Baptism and Marriage.  I also have the privilege of presiding at funeral services where there is no requiem Mass. As a Minister of Charity I primarily visit the sick and housebound as well as bringing Holy Communion to them.

At a Deacon’s ordination, the Bishop places the Book of the Gospels in the Deacon’s hands saying: “Receive the Gospel of Christ, whose herald you are. Believe what you read, teach what you believe, and practice what you teach.” I hope that the example I give is considered good catechesis. 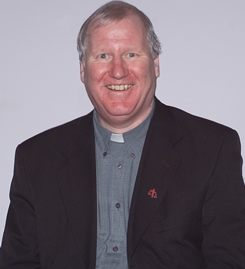 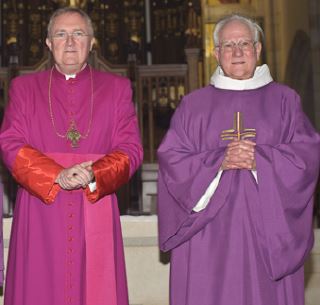 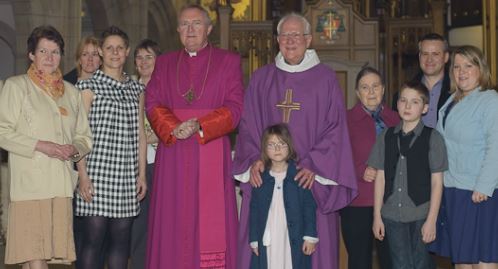 ...and with his family