Founding of the Parish

Saddleworth is an old Yorkshire Parish, on the Lancashire side of the Pennines.

An ancient parish was founded – possibly by St Augustine - in the sixth century.  The chancel of the first church was completed in 1272, on the same site as the present St Chad’s Anglican church.  After the Reformation in the 1530s, there followed difficult centuries for Catholics.  Priests would have been very unlikely in such a remote area and little is known of any Catholic community during these years.

Following Catholic Emancipation in 1820, the first Catholic centre in the area to be established was at St Patrick’s in Huddersfield.  In 1920 Saddleworth became part of the parish of Slaithwaite, Yorkshire (Diocese of Leeds) which had just split from St Patrick’s.  However, Slaithwaite was over ten miles away across the moors, and in the days before the widespread availability of the motor car or public transport, the few Catholics in the area found it easier to reach nearby Mossley, Lancashire, (in the Diocese of Salford) for Mass.  Our earliest parishioners remember walking, often pushing a pram, five miles to Mossley and back.

The first Mass in Uppermill ...

As numbers grew, the priests in Mossley agreed to set up a Mass centre in Uppermill, in the rooms above the old Co-op.  The first Mass was said there in 1943, attended by over 100 people.  It is believed that this was the first public Mass to be said in Saddleworth since the Reformation, 400 years earlier.

In 1952, a deputation went to visit the Bishop in Leeds to ask for their own parish and priest.  Bishop Heenan of Leeds (later Cardinal Heenan) agreed to their request, and entrusted the care of the Saddleworth Catholics to the Society of the Missionaries of the Sacred Heart.  Father Jeremiah Buckley MSC was appointed as Saddleworth's parish priest.

Ladcastle Hall, a large house in Dobcross was acquired as the Catholic centre. The original services took place in the front room, until the stable was converted into a chapel.

Our Church is located on the High Street in Uppermill, one of the larger Saddleworth villages.  It was built in 1873 and was originally owned by the Ebenezer Congregation.

In 1966, the Diocese of Leeds purchased the church building from the Ebenezer Congregation, who were moving to new premises across the road.  The Catholic community in Saddleworth finally had a permanent and centrally located Church.

“It was a source of joy for us that we had a native of Saddleworth, Most Rev Dr William Gordon Wheeler, to perform the opening ceremony, and particularly as he chose his birthday, May 5th as the day to perform his first official task in his native parish”

Bishop William Wheeler of Leeds was born in the Saddleworth village of Dobcross, and the church took his name in his honour, and became the the Sacred Heart and St William Catholic Church.

Adjacent to the Sacred Heart is Platt’s Yard, and in the early 1980’s this land was donated to the Church by two parishioners, Clifford Powell and his nephew Brian.  In 1987 the launching ceremony was held for the start of the new Parish Centre and Presbytery.  This new building replaced the former centre in the old telephone exchange (now a shop) on the High Street, and the former presbytery at 2 High Street, which were separate and across the road from the Church building.

Missionaries of the Sacred Heart

The Parish was lovingly served by priests from the Missionaries of the Sacred Heart, (MSC, from the Latin Missionarii Sacratissimi Cordis) from 1952 until 2012.  See the Previous Clergy page for details of the MSC priests who served at Sacred Heart Catholic Church, Uppermill.

In 2012 the MSC order handed the parish back to the Diocese of Leeds.  Mgr Fr Bernard Bickers was appointed here to Saddleworth by Bishop Arthur Roche, becoming the first Leeds diocesan priest to serve in the parish. 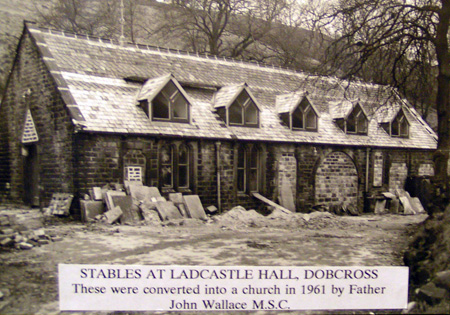 Stables at Ladcastle Hall, Dobcross.  Mass was originally held in the front room until the stables were converted into a church in 1961, led by Fr John Wallace MSC 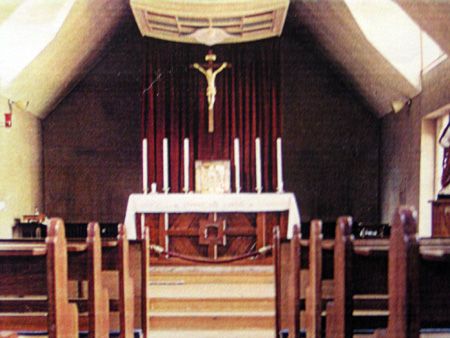 Inside the church at Ladcastle Hall 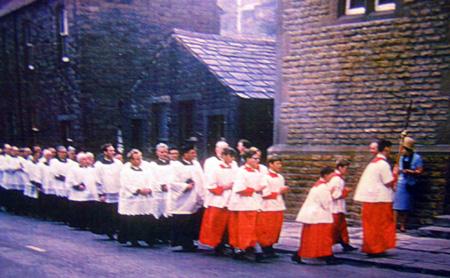 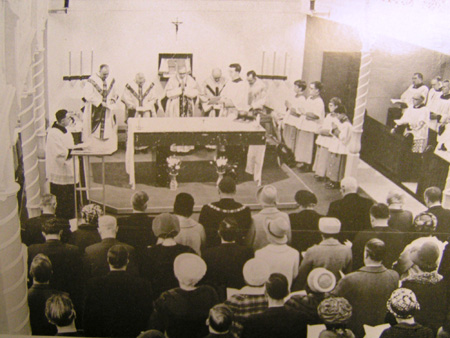